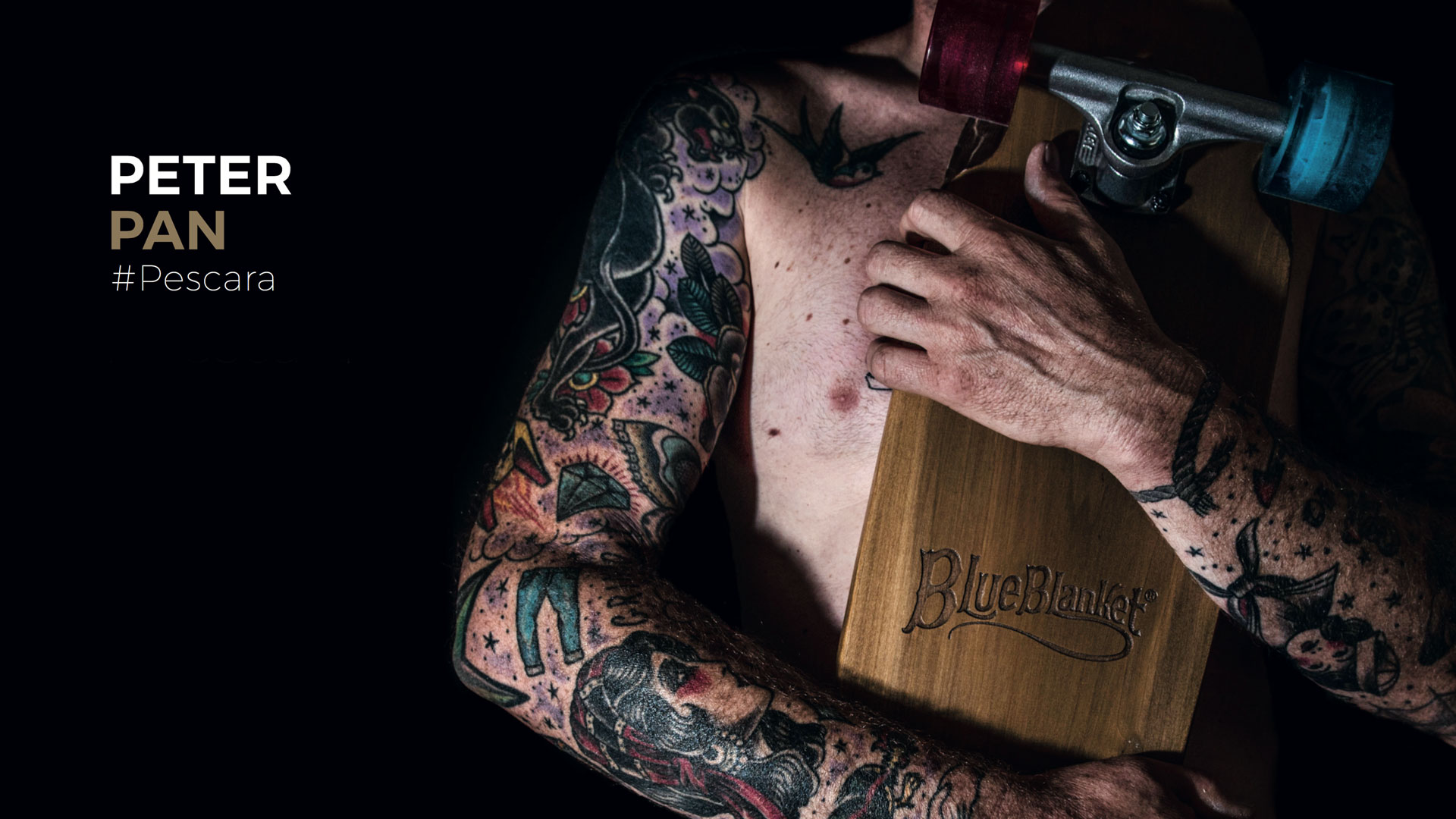 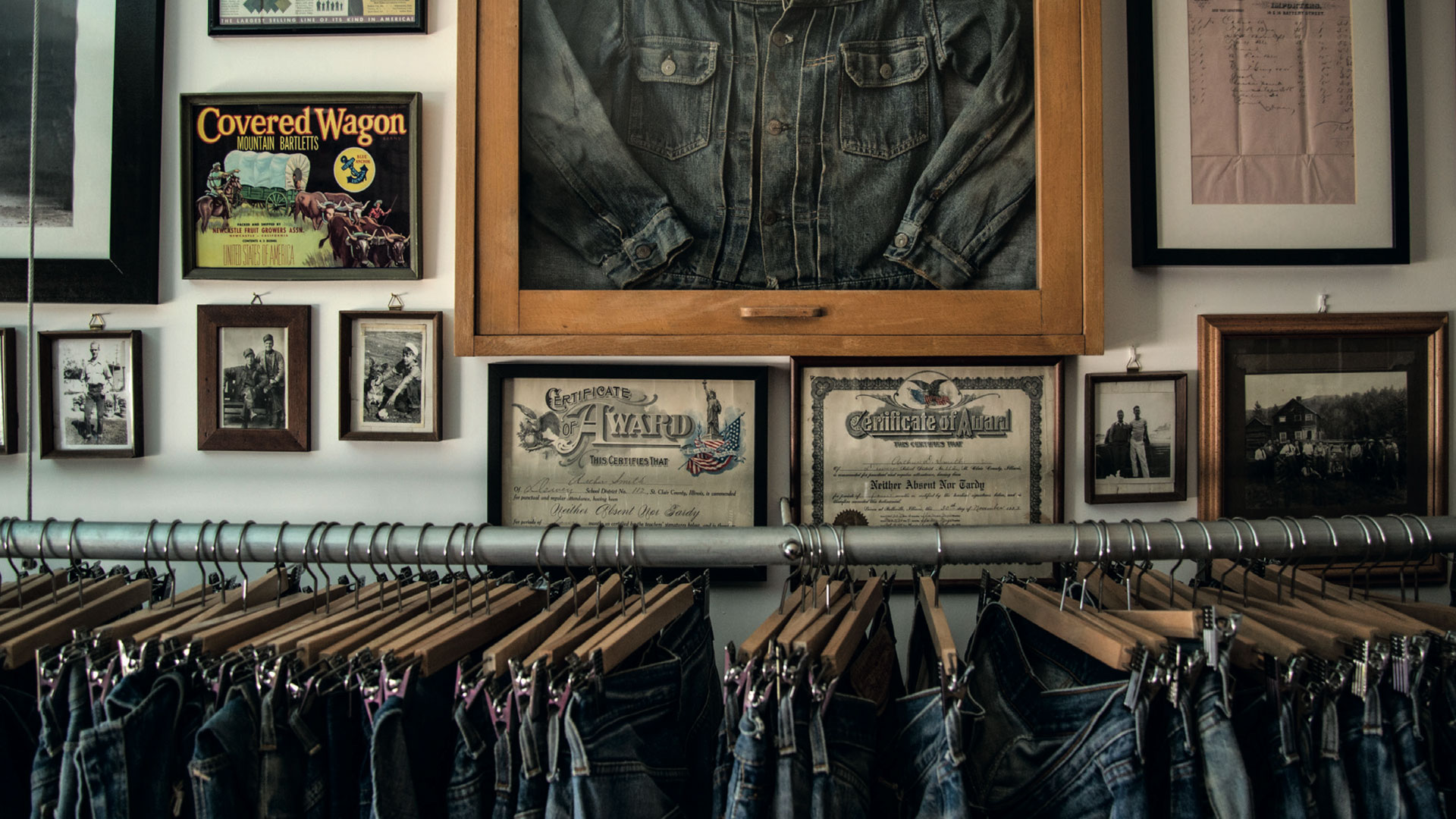 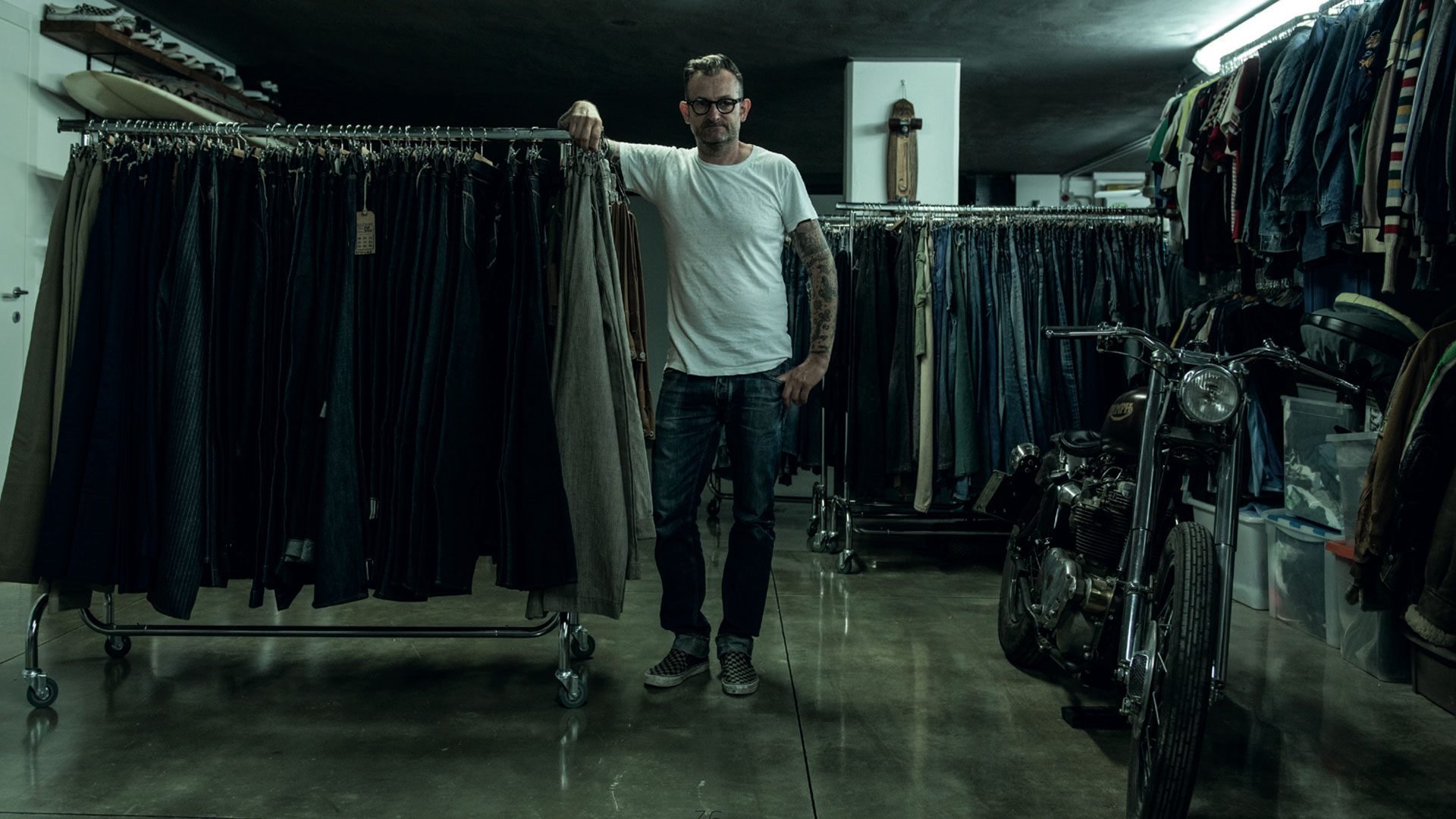 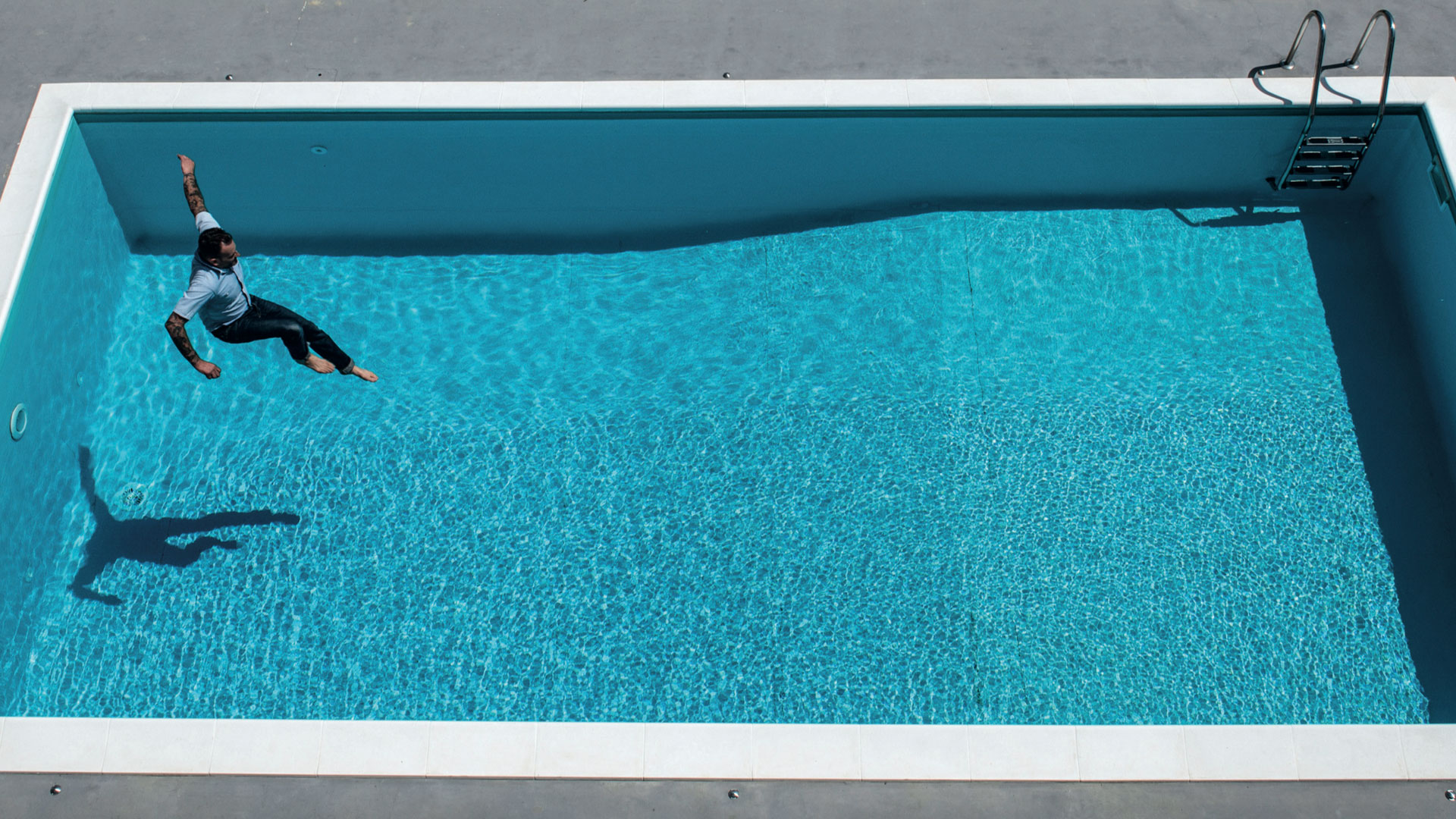 “All children, except one, grow up. They soon know that they will grow up, and the way Wendy knew was this. One day when she was two years old, she was playing in a garden, and she plucked another flower and ran with it to her mother. I suppose she must have looked rather delightful, for Mrs. Darling put her hand to her heart and cried, ‘Oh, why can’t you remain like this forever!”

The face of an aged boy, a pair of nerd-worthy thick glasses, a crew cut reminiscent of an old Elvis military movie, arms sprinkled with tattoos. He may seem like only one person, but as he speaks to you, you look at him and realize that you are in front of a thousand different stories stitched together by a visionary pattern of sky and stars. He throws open the door to a house in the middle of nowhere, a home that could easily be on California’s or Sydney’s seacoast. A perfect den for him: part home, part little status symbol, mostly a game arcade. What strikes me are the televisions, everywhere, clearly at odds with the dreamy environment created by the thou- sands of books, memories, objects, various gadgets, scattered about in an obsessive apparent disorder that in truth is painstakingly neat. Stories upon sto- ries like that about the skin; and as Antonio talks, you wish you could stop him and ask him to tell them one by one.

Antonio Di Battista is a young man, rescued by passion. He tells me about his life with the simplicity and candor of who does things in an apparently easy way as we sit in the large kitchen on the ground floor overlooking a turquoise swimming pool; one of the many signs of the somewhat naive and provincial craving and longing for America. The Son of Abruzzo, a reckless troublemaker and with little or no aptitude for school who grew up on the street like so many other boys in that region in the midst of countless skirmishes and pranks, with one great passion: Far West. Like so many kids of the 60s, Antonio falls in love with the American Indians, teepees, cowboys, smoking colt revolvers and riding off into the sunset. A deadbeat student in middle school and in the Art high school, Antonio then makes the right decision and enrolls in the newborn Istituto Europeo di Design where he learns the basics of being a stylist, creating paper models and designing. However, by his own admission, he never felt like a stylist. As a jeans enthusiast, Antonio starts a collection and has more than 3,000 pairs at home, which narrate the history of denim.

As is often the case, a stroke of luck goes hand in hand with chance or destiny. Brioni, which at the time was but an embryo of what it was to become, was seeking two boys for an internship; and in Antonio’s class there were only two males, thus he was chosen. From this moment, the ball starts rolling and has never stopped since. In a short period, he becomes the head of the clothing company ITR located in Molise a true creative laboratory in the early 1990s – and obviously specializes in the manufactu- ring of jeans, especially the washing and dyeing. He then moves on to Dolce and Gabbana and Armani, always with his hands plunged in denim.

That of Antonio is an authentic success story… from a smalltown boy to prestigious consultant for the big brands. What remains of the boy’s passion are the virgin canvases, the ones that were once made of a breathtaking blue and old selvedge fabric, made on old looms. Those stiff and crisp pants, molded by time and everyday life, like the articles of his collection, which slowly increase in number and in value to become one of the most formidable jeans collections in the world. With the mania of a collector and the passion of a lover, Antonio chooses them one by one, meanwhile imagining a line of his own.

It all happens quickly. Blue Blanket, a collection of few pieces, is enriched year after year with new models. All original denim, worked on a loom, selvedge fabric with the utmost attention to detail. Few items, always made with intact canvas, cut in a classic style and individually chiseled. With the unwavering stubbornness of the people from Abruzzo, Antonio “capatosta” does not stop pursuing his dream of the purity and integrity of the American article … with the hope of finally being able to dedicate himself to his business fulltime, of being able to give up a suc- cessful consulting career and dedicate himself exclusively to his collection.
Notwithstanding the difficulties of reconciling the two professions, the brand grows, its reputation spreads like wildfire thanks to word of mouth of the many fans around the world and Blue Blanket gains a prominent position among the best known brands beloved by the Indigo blue maniacs.

From the hills of Pescara overlooking the Adriatic Sea, Antonio doggedly pursues his passion, something that perhaps is only possible in this area of Italy, a place that somehow looks like the American shores that Antonio has seen in his coast to coast journeys travelled many-a-time on the painstakingly restored vintage motorbikes. Few iconic garments, mostly pants, sporting an impeccable and philological cut and only slightly modernized for wearability. A couple of different models inspired by the working world including an apron in Genoa canvas, which is a dream in itself. The meticulously studied details from the original rivets and metal buttons to the counter stitched seams resembling those of the western cowboys consecrate Antonio to inter- national fame, and his Blue Blanket jeans are sold all over the world, except perhaps in Italy, because as we know “no Man is a Prophet in his own home”.

Everything is cared for and thought through, just like his home, which we enter on our tiptoes and that discloses much about his taste. Partly home, partly laboratory. The ground floor overlooks the pool with the sea on the horizon, somewhere in between Miami and Abruzzo. The first floor, inste- ad, is dedicated to night-time, with multifunctional, spacious, ample spaces.

Finally, Antonio’s studio takes up the second floor; an open space displaying only part of his jeans collection, old skateboards and surfboards propped against the walls, a handmade, well used tailor table; all in a maniacal order. This is where the creations for his line are born. Old photos, books and stacked vinyl records narrate the young man’s vision of the United States. A vision made up of flower children in Volkswagen vans, bonfires on a beach, surfing and rock music. The basement reveals the true surprise. A laboratory, or rather the laboratories.

The workshop with the old custom Triumphs that he re- stores with his hands, motorbikes everywhere, some refurbished others left as they are because the signs left by the passing of time are to be treasured. A carpentry bench where Antonio builds fascinating lon- gboards in precious and rough woods, which seem to have just popped out of a Beach Boys movie and the golden surfing age. In a small room at the back, the music room with guitars and a large sofa where one can play for hours. On every wall his collection of historical garments: from the historical Levis 501 jeans and the first Vans shoes of the first collection, to western boots and cordovan police jackets. In the middle of the shipshape displays, the Blue Blanket collections stand out for their intact and wholesome color and the crispiness of the fabrics. A wakeup-call in the midst of all that vintage. Immediately, I think that there are still many stories waiting to be written, that this is where the fantasies, that others will dream, are woven.

As I sit at the great welcoming kitchen table, I reflect that this modern and minimalist home with a con- temporary flavor is in fact a treasure chest. Two private, tasteful modern floors, enclosed by two artisanal and operative shells. This too is Abruzzo. An ancient land where apparently everything is possible, a land where one passes through and where one can afford the luxury of taking a risk and making a mistake, for who is to witness it? Part tradition, part new world; a land of opportunities and of feeble, lazy tiredness. A country from which to flee to see the world, but to return to after to design it again as we wish. Here everything is possible, because what comes naturally is doing nothing and living trouble free between sea and mountains, in a reassuring small town life. On Pescara’s anonymous hillsides, it is also possible to dream of the west coast and to create cloths that travel around the world, narrating a unique story of craftsmanship and attention to detail.