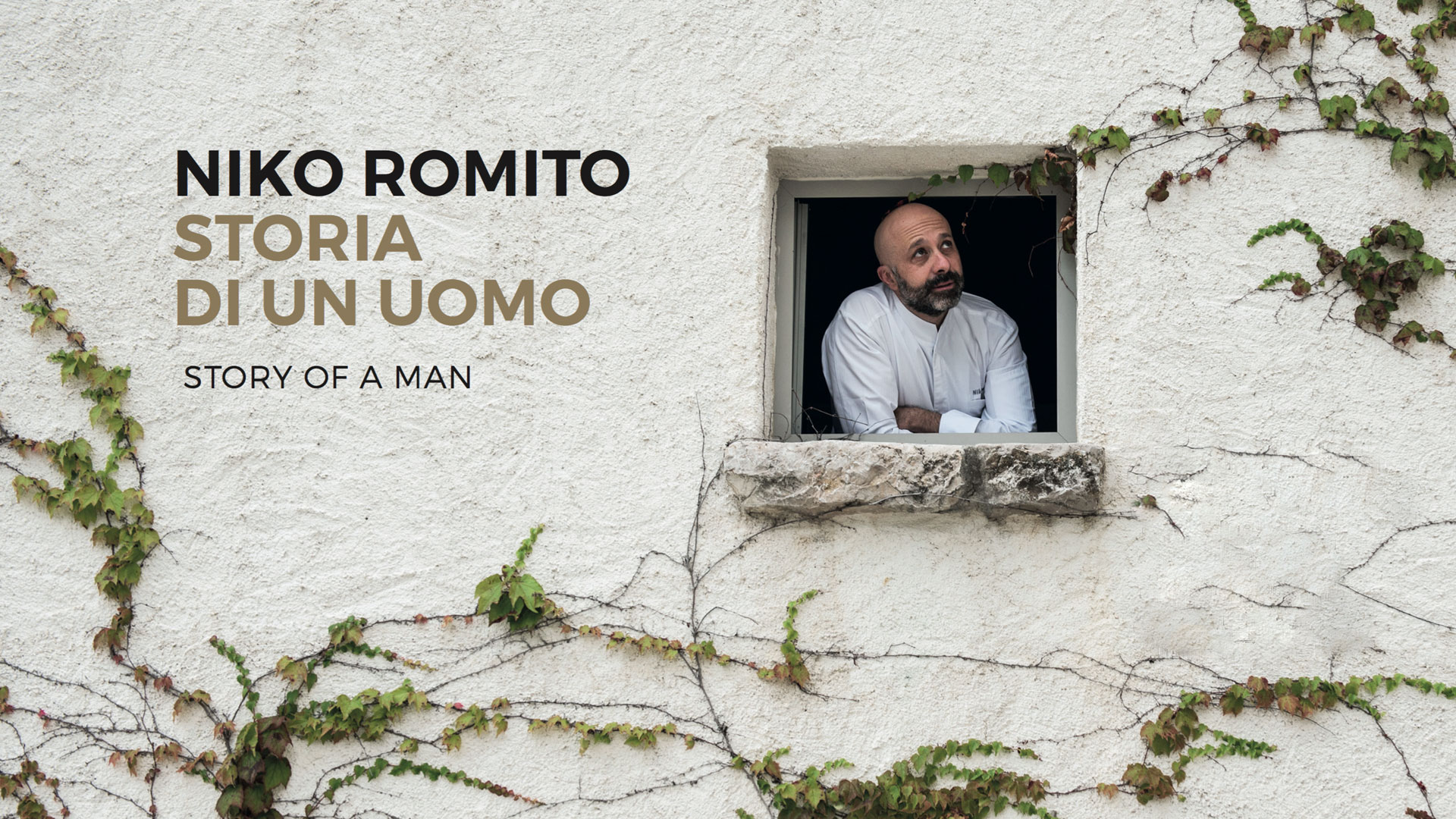 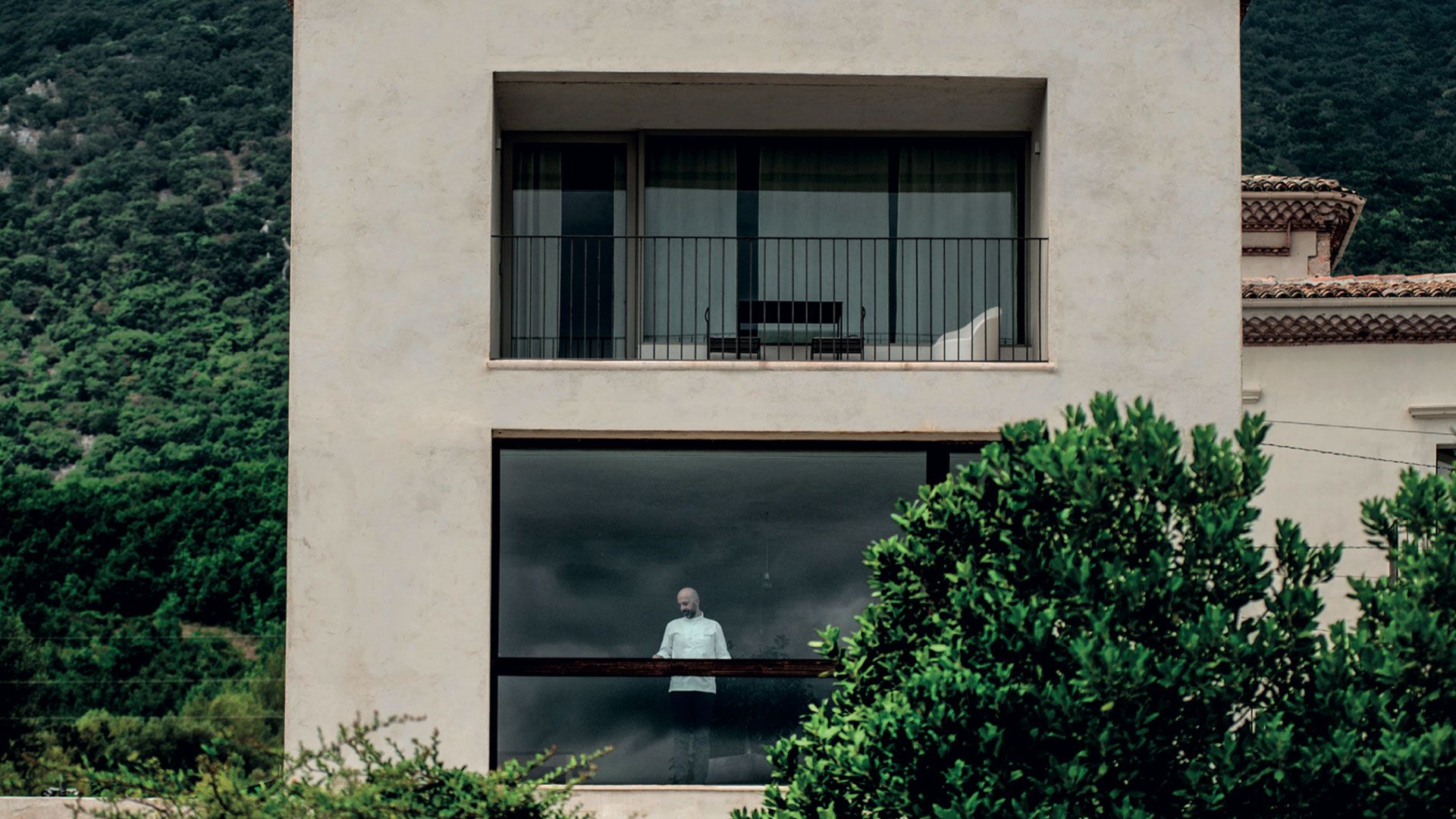 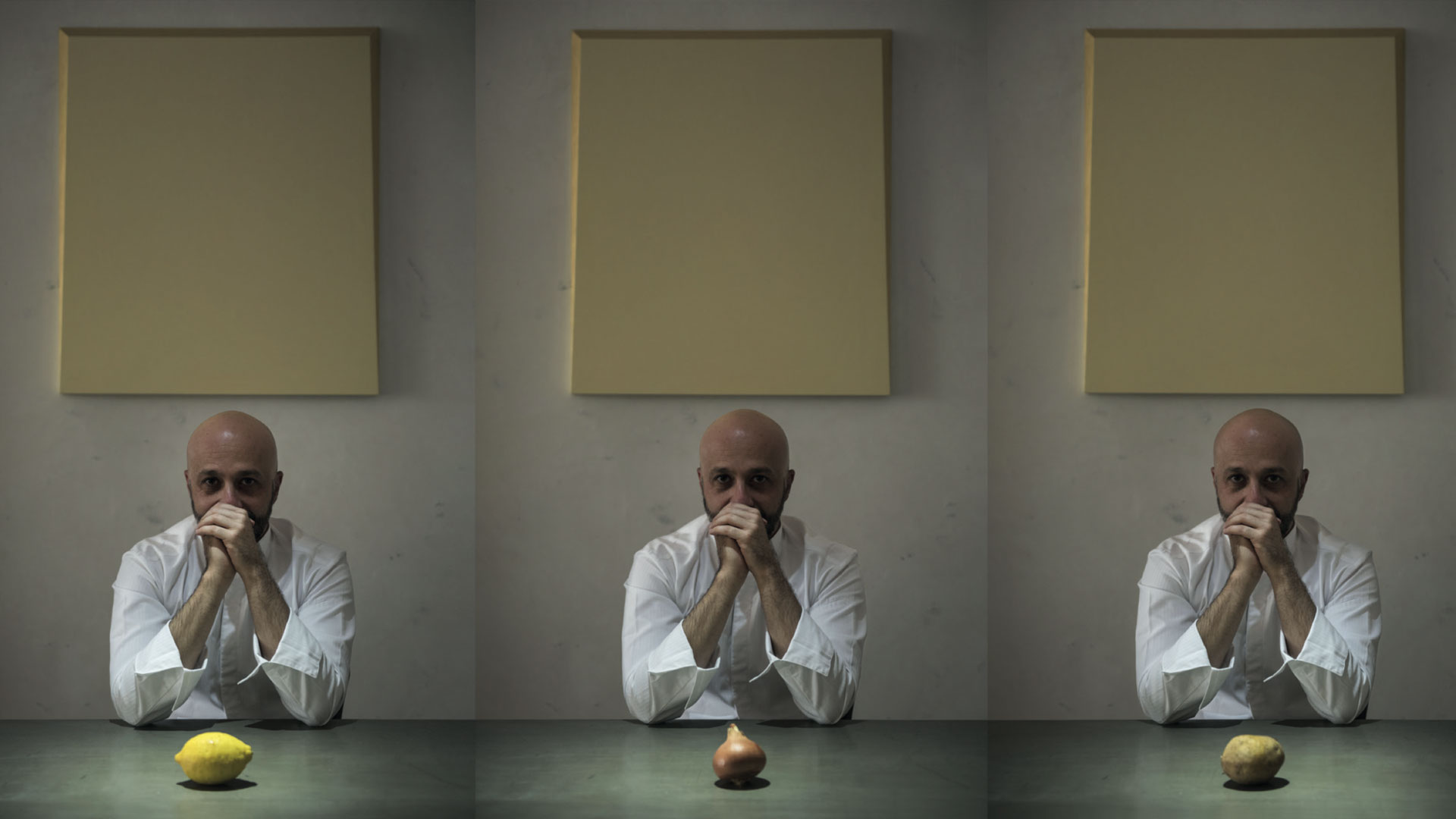 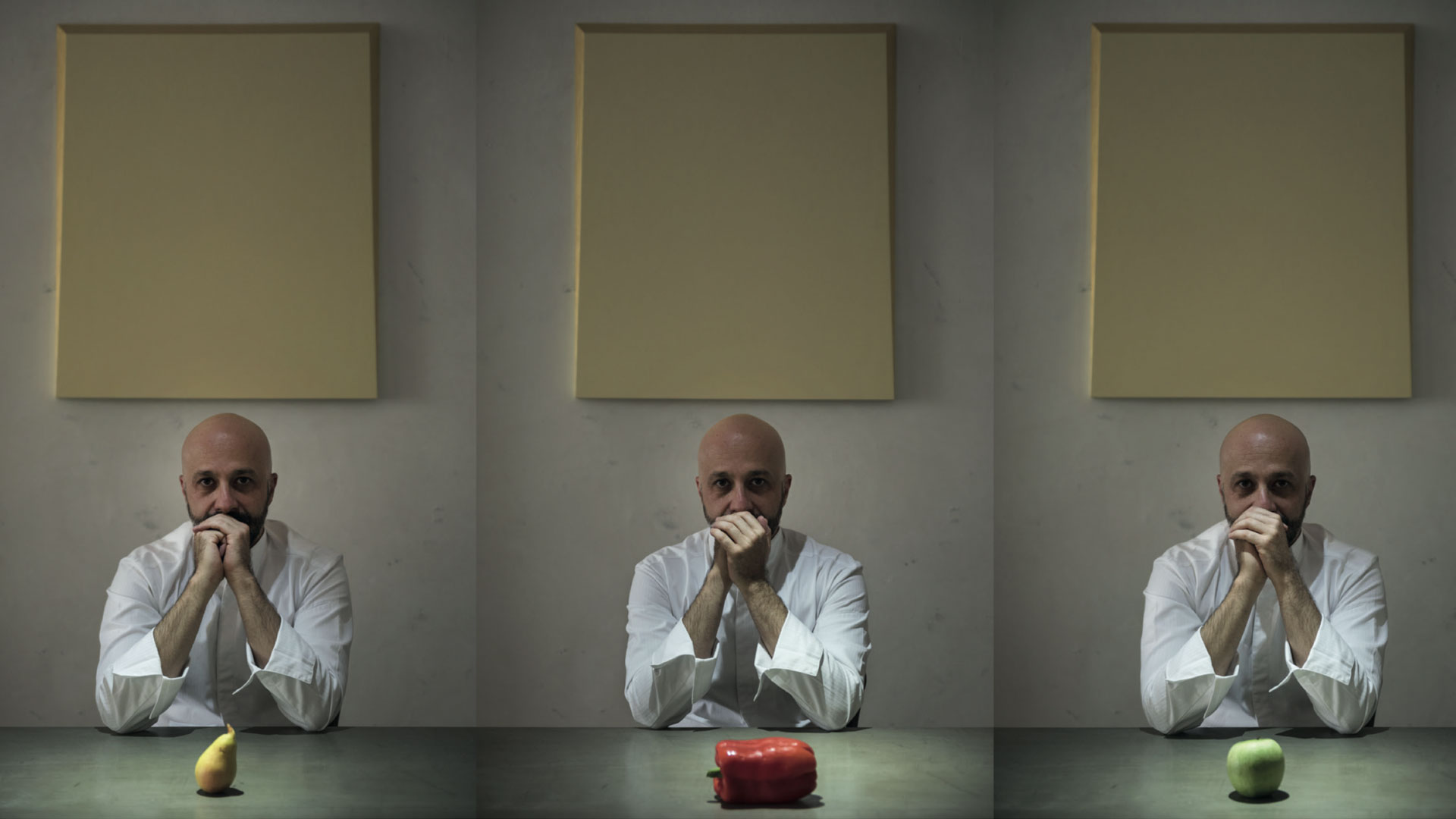 My recollection of Niko is that of a young boy with fair, curly hair; memories from a long time before he became the priestly and wise man he is today, a lively kid bursting with desire to conquer the world, driven by an anxious and contagious hunger. Strange how the most technical and scientific cook of Italy was born from an irregular, heterodox training and was basically self-taught notwithstanding a debt of gratitude to the great (and underrated) Valeria Piccini.
Growing up, Niko enjoys a bourgeois Roman childhood. A scooter, high school and then university at Luiss, far from the peaks of the Apennines and from his native Rivisondoli, on track to become an urban banker or economist. However, the people of Abruzzo have an unbreakable bond with their mountains, which, like sirens, are constantly calling them back, especially if you were born there. A call that lures Niko back when he returns to smell the family business, a pastry bar, in the same premises that become the first home of the Ristorante Reale.

In his youth, Niko often travels to Apennines to visit his family, in love as he is with these mountains and the view of the Majella. He never really thought of living here, until the unexpected happens. I firmly believe that people’s lives are dominated by events and that basically intelligence consists in a person’s ability to adapt to situations, in this case a tragic one: Niko’s father passes away and the young boy must quickly become an adult. Like all the Abruzzesi, Niko is much tougher than he seems and he decides that the future will be the kitchen, right in the family premises of Rivisondoli. Little by little, the Reale from a bar becomes a trattoria and then a restaurant.

He knows little about cooking, but this becomes a resource, not a limit. The many hours spent studying and in the kitchen do not tire him, Niko is like a pristine, untouched white wall ready to be painted with a breathtaking fresco.
I remember him extremely young as he breathlessly shows me the very first Roner I had seen in my life. Niko had returned from Spain with a sparkle in his eyes after visiting one of the first “Lo mejor de la gastronomia” and talked to me about the wonders of low temperature sous- vide cooking when nobody in Italy was doing it yet. Curiosity has always been one of his constant personality traits along with the hyper-activism that leads him to forge ahead at a breakneck pace. One day, in the immaculate rooms in Rivisondoli, Niko shows me the blueprint of an old ruin, a 16th century former monastery in Castel di Sangro. I knew Castel di Sangro only as my childhood nightmare because of the Italian tennis federation summer camps that were held there; true places of youth torture. “It’s a fantastic place and I want to transform it into a mountain hotel and a school for young chefs, but I have to indebt myself for a lifetime to do it”, he said. It seemed like a joke, a dream just thrown out there, one of the many projects that are born at the end of a meal while sipping grappa…but no. After a handful of years, that dream becomes reality.
Casadonna is an amazing place set in the middle of nowhere and has become one of the key benchmarks of Italian Cuisine. A Relais with very few rooms designed and cared for in painstaking detail. To define it as a hotel would not do Casadonna justice. Rather, a mountain home with refined architecture, built and furnished with warm and organic materials; a breakfast that on its own deserves a trip; the landscape you can enjoy from the windows becomes a whispered suggestion that is reinterpreted and framed by a mental lens only apparently glacial and detached but that in truth offers a vision of purity and mountain clarity.

Casadonna has also become the new home of Ristorante Reale that in the meantime has been awarded three Michelin stars and that in just a couple of years has been acclaimed the best restaurant in Italy, with its particular style, essential and limpid in every way, from the famous cuisine to Cristiana Romito’s minimalistic way of service that has set a new standard. In collaboration with the University of Pollenzo, Niko Romito Formazione, the vocational school for professional training, forges young and outstanding modern chefs who have clear ideas and an unmistakable style. At the same time, Niko’s extreme viticulture project located close to the sixteenth century monastery at almost one thousand meters above the sea level has won awards thanks to its Pecorino wine. Thousands of other dreams and projects are born daily apparently following a dizzying natural rhythm, but on the contrary inextricably linked by an invisible thread.

Over the years, I have learned that one must always believe in the Romito siblings and never underestimate them, as Niko and Cristiana have the seemingly magical gift of giving substance to dreams. In reality, the two are very down-to- earth and “capatosta” – stubborn. They have an extraordinary ability to work, building dreams and then glazing them with naturalness. Niko’s cuisine is solid and thought-out, if one goes beyond the evocative poetic lightness of the simple dish names such as Savoy Cabbage and Potatoes or Lentil, Hazelnuts, Garlic and White Truffle (just to name his latest creations). Names that refer back to the essence of the product and to the intimate knowledge of local recipes, but that in truth are masterfully executed and studied in every detail. It all begins with the ingredient, initially broken down and analyzed, then passed through an extraordinary sensorial memory of tradition, later disassembled into its physical- chemical components and finally reassembled through cooking phases that are never an end to themselves, with a compass firmly showing the way to the final result. Technique and even technology is essential to this creative process.

The goal remains pleasure and edibility, the ability to play with the memories and emotions of a land and a dish almost in a neuronal way. In the relative few years of life of Niko Romito as a chef, I have witnessed him grow and change, on a journey towards this simple and apparently spontaneous complexity, which instead is the fruit of applying the Cartesian method. The result is a new Italian cuisine that has everything in it, the past, the present and the future. The Ristorante Reale is a workshop, the atelier where one can showcase increasingly targeted intuitions, the stage of infinite applications.

This is how new projects kick off and how new adventures begin. Intelligenza Nutrizionale – Nutritional Intelligence – is an experimental project that aims at bringing quality, efficiency and economy in the collective catering and as always, it is an extremely serious endeavor. Prestigious partners include the University Sapienza of Rome that certifies the work and the Miraglia group that is offering its private hospitals to implement the project and is investing resources. It all begins with hospital canteens, the quintessential representation of eating badly. After a project that lasted two years, patients were served quality meals thanks to a complicated but winning process that is now ready to be exported to all fields of collective catering. The dishes we tasted are good, fragrant, digestible, recognizable and fully Mediterranean. All the while, keeping the economic restraints in mind and managing to square a seemingly impossible circle. The approach is a scientific and spontaneous one that lends itself to a thousand variations and as a matter of fact, there are many projects afield. To name a few, Spazio – the modern bistros that represent the natural outlet of the Niko Romito Formazione training, which offer hands-on experience to new graduates – and project Bomba which brings Italian patisserie to the Rest Stops on the highways. Many ideas and insights that stem from a single common idea: rethinking Italian cuisine in every possible way.

The latest adventure is the Niko Romito restaurants in collaboration with Bulgari, the true luxury flagship and Ambassador in the world of the BelPaese. Not only jewels, but also high-end hotels inaugurating in the main world capitals, from the emerging Eastern countries to traditional Europe. Every Bulgari hotel will host a Niko Romito restaurant; classic Italian cuisine will be everywhere. Well, classic in Romito style!
It took work and dedication to rewrite the protocols of historical dishes such as fettuccine, tortellini, Milanese cutlets, risottos, braised meats and all that makes our cuisine famous worldwide.

Whilst paying attention to Italian recognizability and typical characteristics, Niko’s cuisine becomes increasingly similar a score by Coltrane on the upbeat or an “Attesa” by Fontana. The intuition of a genius who understands that a canvas is not only two-dimensional but also three-dimensional with the apparent definitive simplicity of a cut that pushes us beyond the canvas plane. “We have reached a core of dishes and gastronomic concepts in which we believe the essence of fine Italian food is enucleated”, stated Niko who crystallizes his thoughts about his highly innovative cuisine.
My journey into Abruzzo starts and ends here, in the rooms made of rocks of Casadonna, the best metaphor of this incredible land that molds unique talents and that is painstakingly beginning to make its way into the world while remaining solidly anchored to its territory. Suspended on the edge of the empire, dotted with sparse, uncontaminated and little inhabited hamlets, still uncontaminated, floating between ancient times and the modern era. A different Abruzzo is possible; one that inexorably binds the landscape, the knowledge, the products and the views and that can weave all these elements together using them as a common thread on which an acrobat safely moves between the past and the future. The risk lies in stumbling, but that is also the beauty of it.

Niko Romito: a stubborn “capatosta”, a chef, an entrepreneur, Italian but first and foremost Abruzzese.