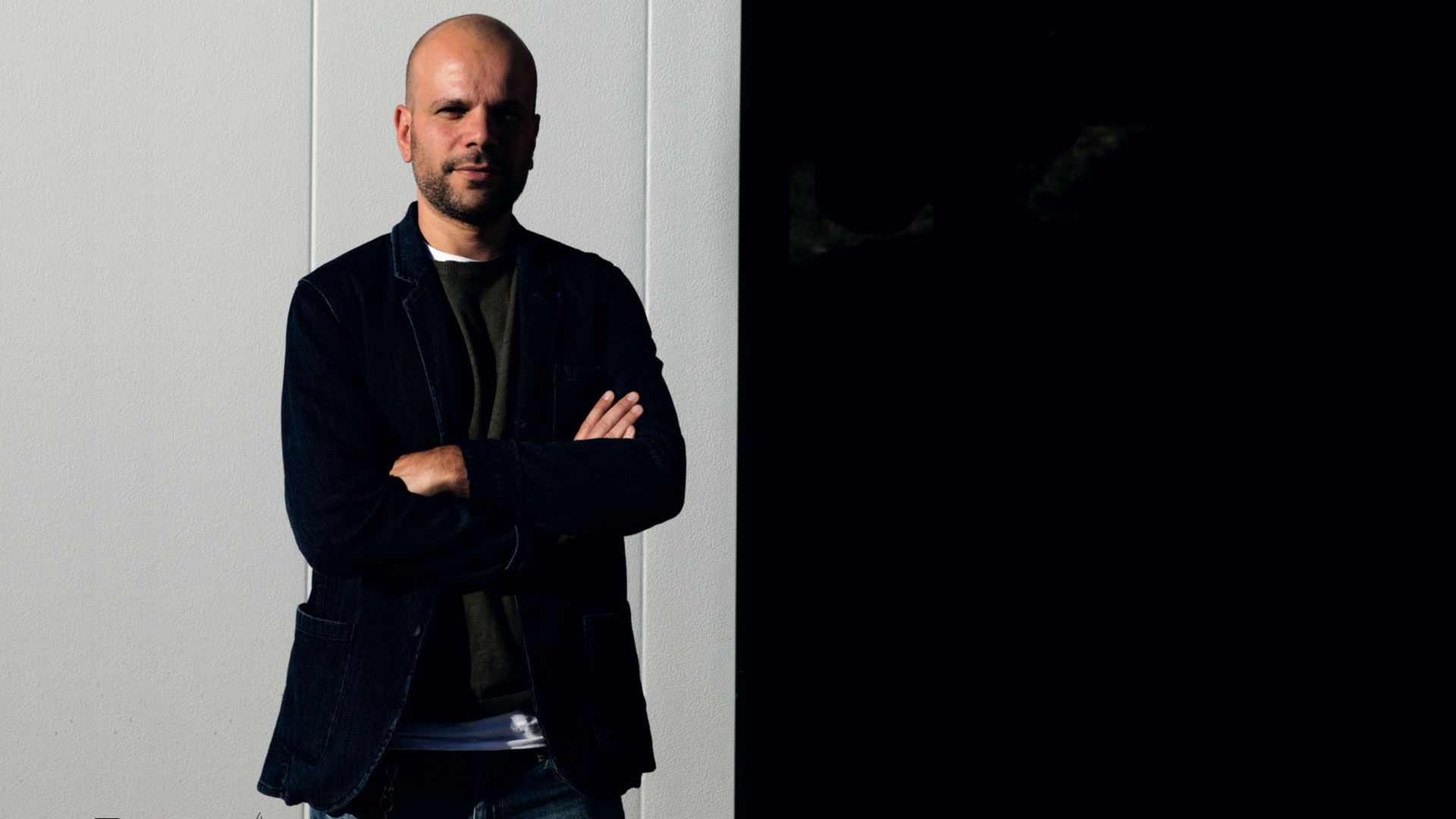 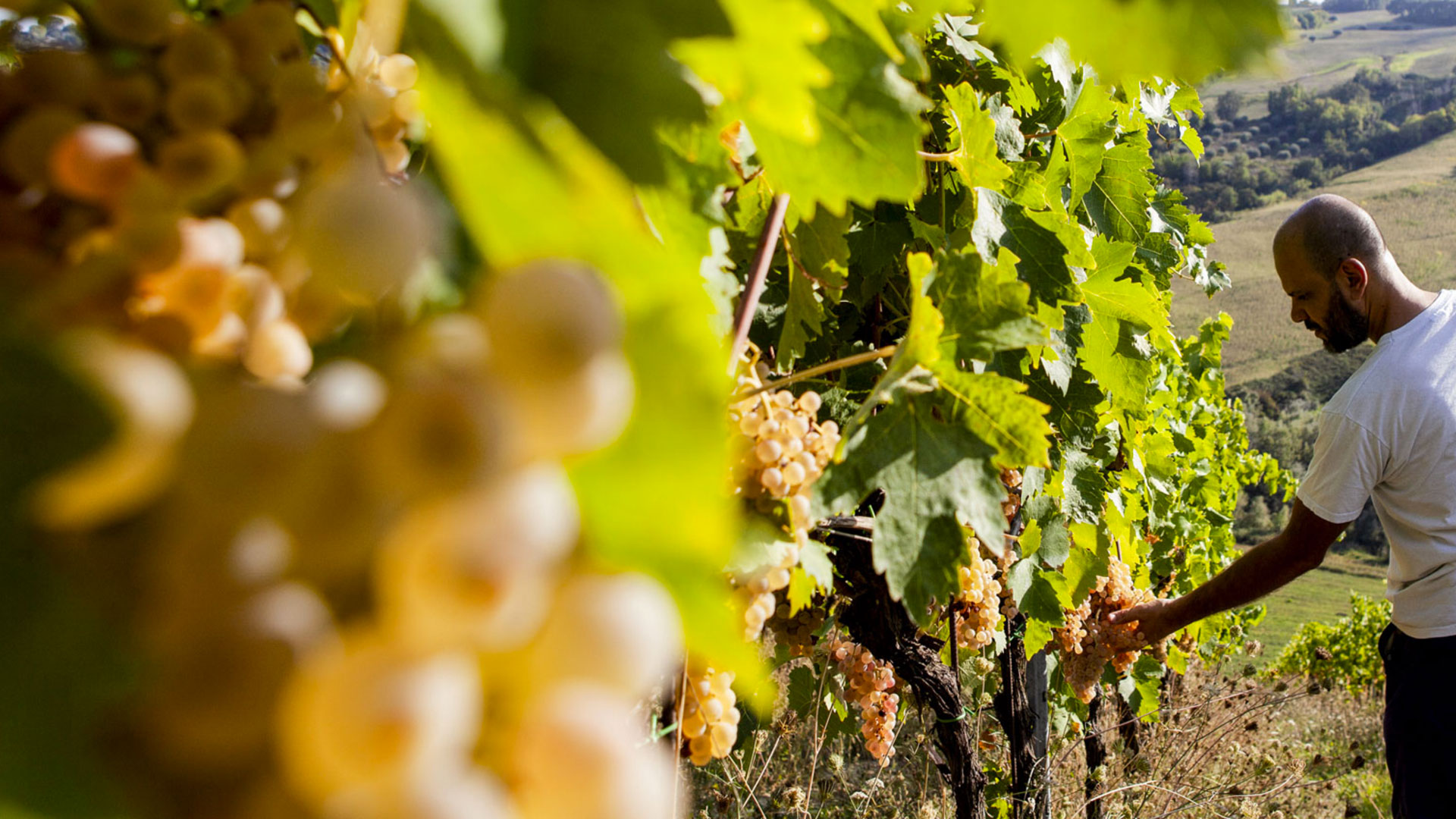 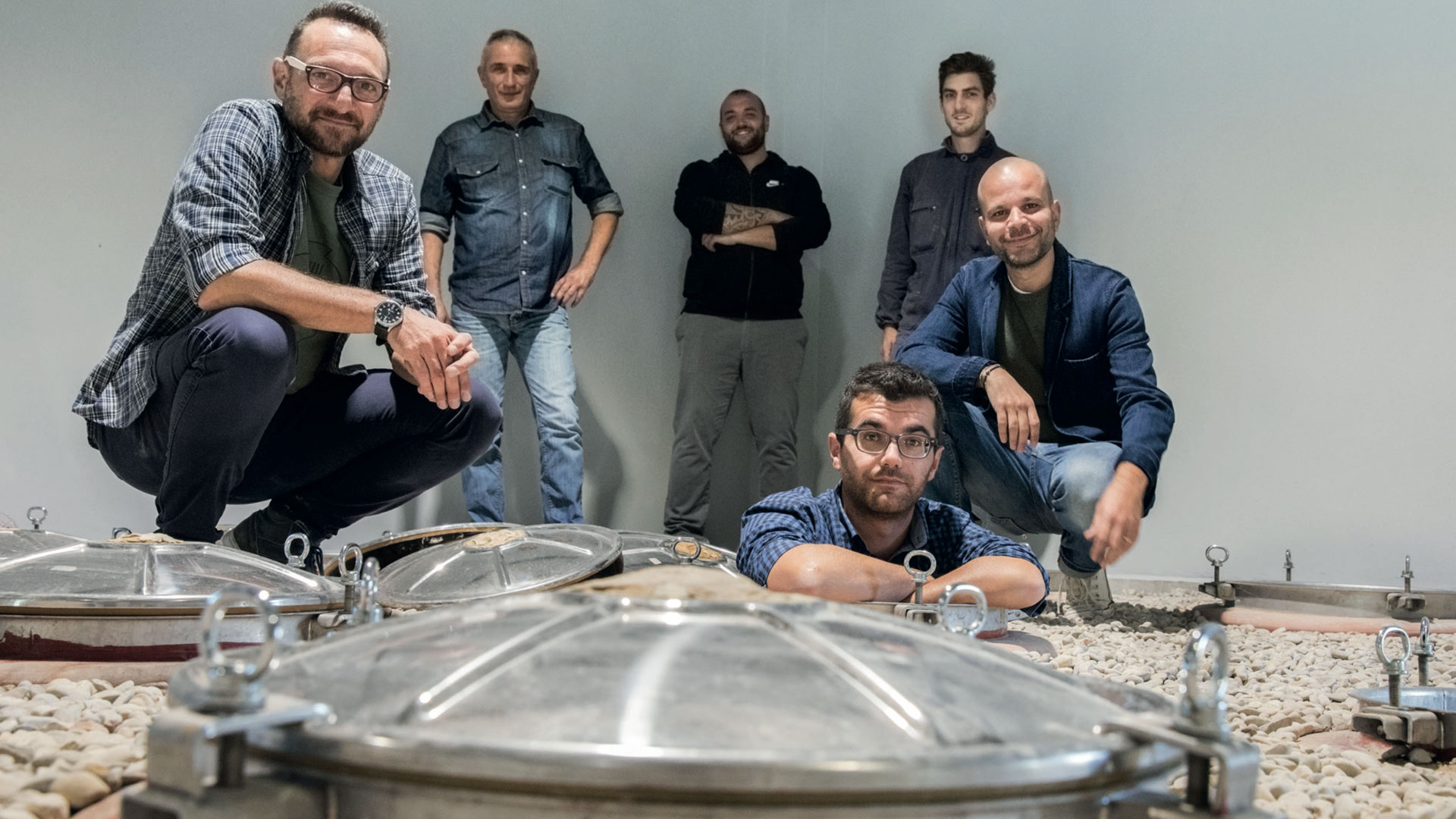 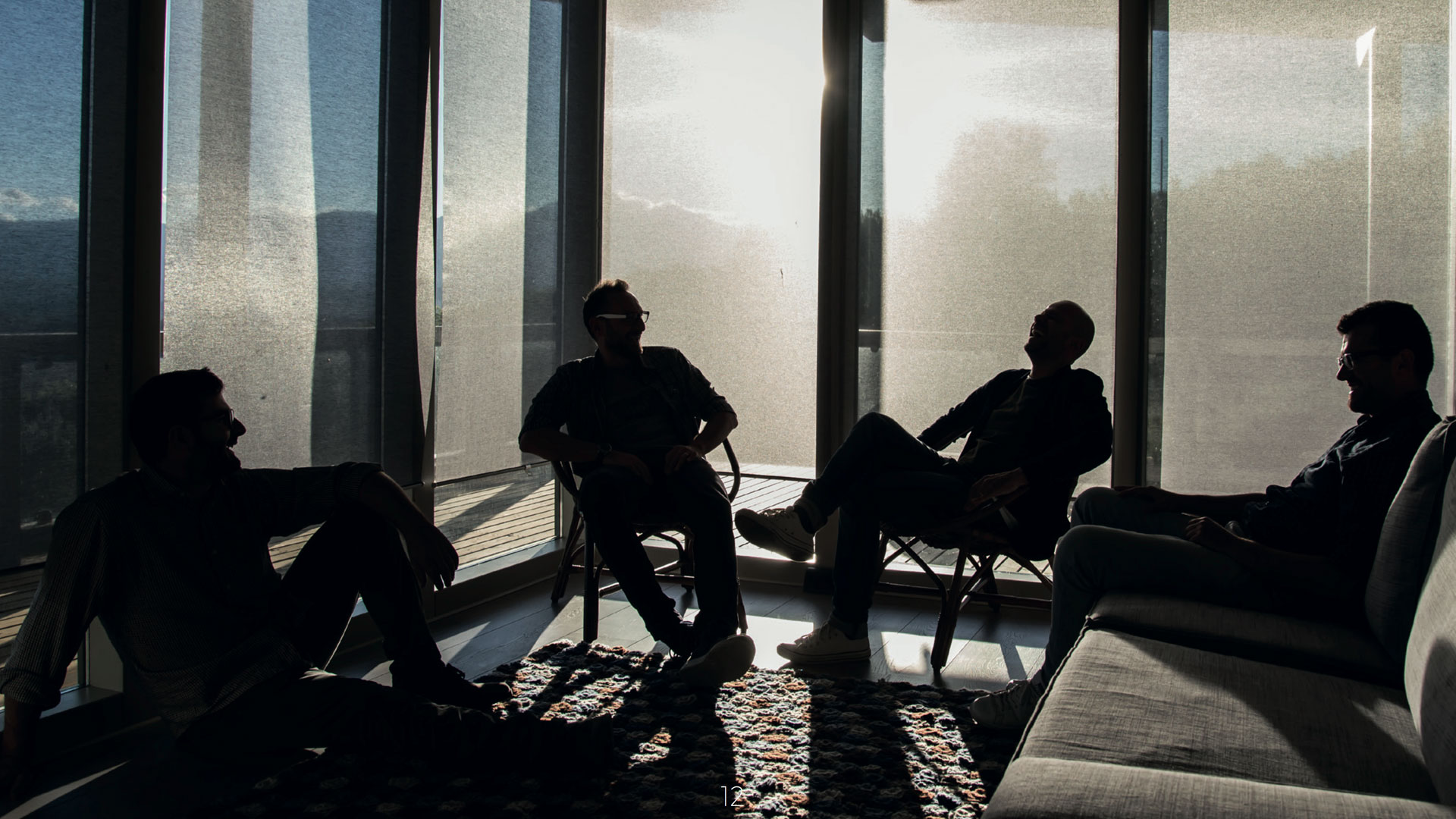 “I had my own landscape, but in order to represent it, it had to become secondary to something else: to people, to stories. The Resistance represented the fusion between landscape and people.”

The car grinds forward up the mule track; a winding, tortuous road that climbs between the hills and the sky. Along it, vineyards and a few, sparse, disheveled houses. Suddenly you reach Treciminiere and everything becomes clear. Francesco Cirelli’s home is perched upon a knoll, facing the eroded rock formations of Atri, against the backdrop of the hills of Pescara with the green of the Adriatic Sea on the horizon. A clump of Abruzzo, nestled between Pescara and Teramo, a corner of paradise, suspended between heaven and earth. The rock formations (named Calanchi) make the difference, long streaks crossing the hill, brown wounds that show the nature of this rocky and clayey territory, in the valley, a sleeping beauty that gently prods the fresh air from the glaciers towards the sea.

All around, the vineyards that Francesco has planted over these past few years. The Biological Hill – La Collina Biologica is in front of you, you see it and all becomes clear.
Francesco Cirelli meets me sporting an aged boy’s look. His wide smile is contagious, his glance lively and inquisitive. With his jeans, mountain boots and plaid shirt, one immediately understands Francesco is an atypical Abruzzese. The history of Abruzzo in this journey is increasingly becoming one of leaving and returning, of escapes and repentances, as if this land were something to run away from, but that stays in your blood and bones. “I know very little about Abruzzo, only the little that runs through my veins”. Flaiano’s phrase echoes in my mind, while Francesco tells me his story, a success story and a tortuous one that is never linear just like his restless spirit.

Part playboy, part Conrad, he left Pescara at an early age and attended high school in the tough and severe Morosini Military Institute in Venice, bending to the martial rules and rigid discipline aimed at forging character. Francesco, however, speaks of this experience without that romantic affection that one would expect, describing it instead as simple and forming episode of his life, a heart-warming one like that handful of friends he met in the classrooms overlooking the lagoon, people who are still dear to him. University follows at the Bocconi in Milan and while talking, I wonder where he has hidden the gray grisaille suit. Finally working in the wine industry where he becomes the marketing manager of prestigious and high-flying brands, which have little to do with what surrounds him but that have molded him.

Only ten years ago, Francesco made the choice of going it alone and started producing wine from the few vineyards at the Treciminiere. I remember very well the first time that I came across these wines during a tasting, as they were completely different from all the traditional Abruzzo wines. They stood out in their minimal packaging, n the clear and simple labels, in the use of small and light Burgundy bottles. Moreover, in a region where winemakers competed to offer the heaviest and most self-aggrandizing packaging, the Treciminiere had made the courageous and pragmatic choice of a screw cap.

The sommelier’s expression as he opens the bottle is etched in my memory: what is a screw cap doing on a bottle of biological Montepulciano? Blasphemy! But then, once the wine was poured in the glass, it went down with pleasure and simplicity, without the woodiness nor the excessive concentrations that at the time were so fashionable. A very pleasant wine with a comforting rustic tone and an acidity that immediately made one salivate and demanded food, an ancient, but at the same time very modern, Montepulciano. I believe it was at that winetasting that I invented the term “gastronomical” applied to a wine. The rest is history, a resounding success for these wines that fly from mouth to mouth and are on tables around the world.

Other traditional Abruzzo wines followed the first 2008 Montepulciano: Cerasuolo, Trebbiano, and Pecorino. In 2011, the terracotta amphora line is launched. Until then, nobody had ever thought of producing wine in terracotta amphora in Abruzzo even if just a stone’s throw away, in Atri, Ancient Roman amphorae for winemaking had been discovered, a testament to an ancient custom. Francesco begins with very few amphorae at home and almost as in a game, he experiments the Georgian technique on his home grapes. At first, the wines are messy and with some problems, especially linked to their youth, while at the same time, they are vital and energetic. Amphora wines soon capture the attention of a curious and cosmopolitan public, people who are looking for something more from, than glacial enological perfection. Next to the house of Treciminiere, a cellar is built around these first amphorae. An essential cellar that Francesco designs and builds with strenuous effort using his own hands, given that with the passing of time he has returned permanently to Abruzzo and has created a family with his partner Michela, from Palermo, and his first daughter, Stela. The first years must have been challenging and exciting. Many amphorae are added to the first few and now take up a large part of the new cellar. The wines become increasingly better and more complex year after year, opening a new path to Abruzzo’s winemaking. The experiences encountered far from home, travelling around the world and seeing things from new points of view is an essential prerequisite of being Abruzzese in a new and different way. That wandering and adventurous spirit that pushes a young boy to forsake the reassuring strolls around Piazza Salotto and sipping beers on the beach, it sticks to his skin and settle.

Making wine is a wonderful, exciting experience, but it is not enough. The love for these landscapes that has driven you home now is imbued with awareness. The vision cultivated and caressed for years becomes reality in 2013 with The Biological Hill. La Collina Biologica is a happy intuition that is born from the breathtaking view from Treciminiere, a concentrate of Abruzzo with its grass, sky, sea, snow, clouds and rock as far as the eye can see. An entire valley that follows certified organic production methods where one can protect biodiversity and agricultural innovation. The vineyards of the Cirelli wines, the geese breeding grounds for the cured meats that Francesco has always produced, the olive groves, the land reserved for pasta and chickpeas, the many beehives for honey production; these are all pieces of the same puzzle, because a territory does not live on monoculture, but only thanks to the agricultural diversity that our grandparents knew so well. However, the true novelty is that of not stopping but instead of inventing an incubator of small farm businesses thanks to a simple intuition: Francesco’s farm business puts the land and the commercial network on the table whereas the young farmers bring their ideas and hard work. So starts the production of high quality products.