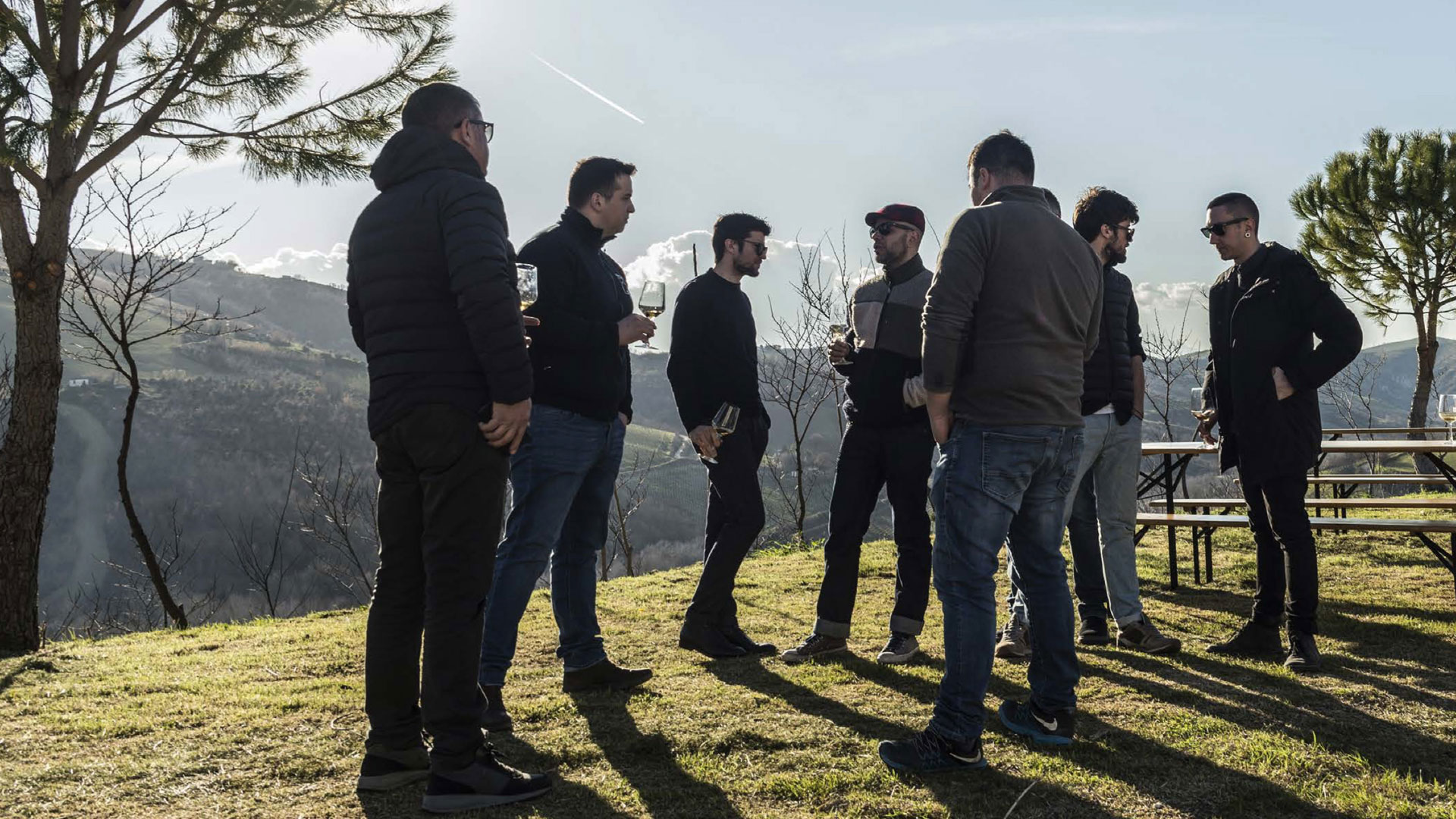 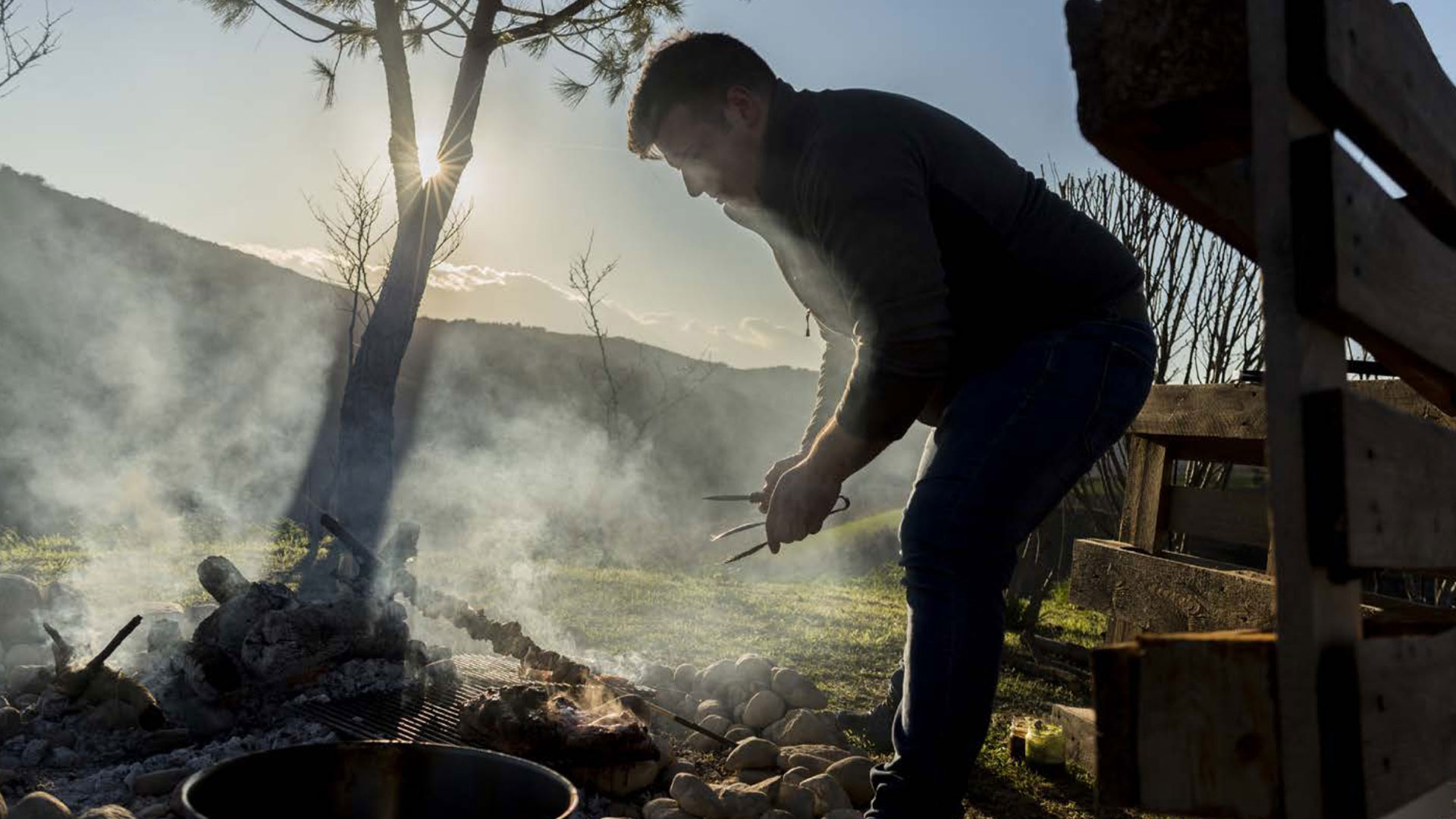 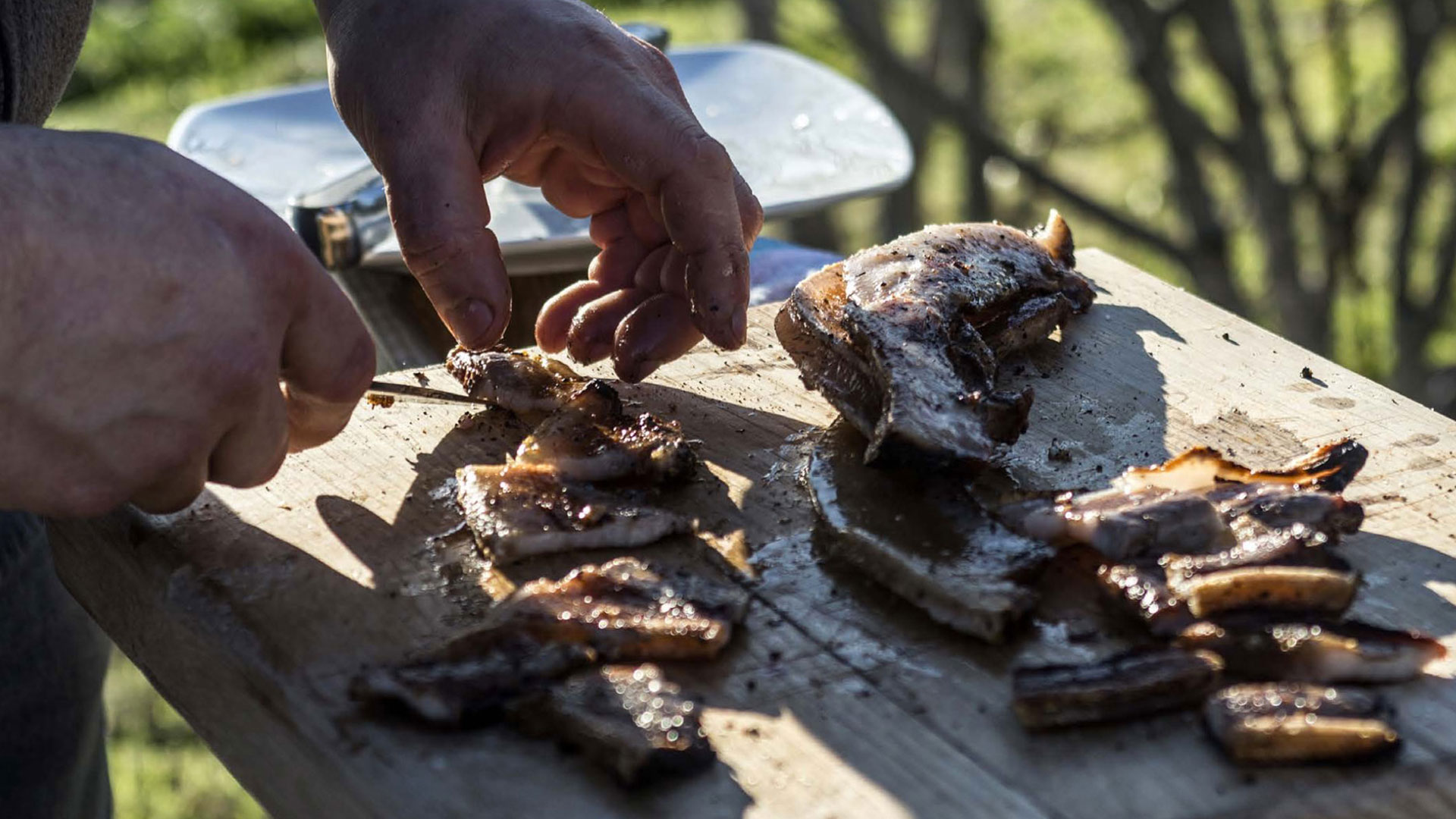 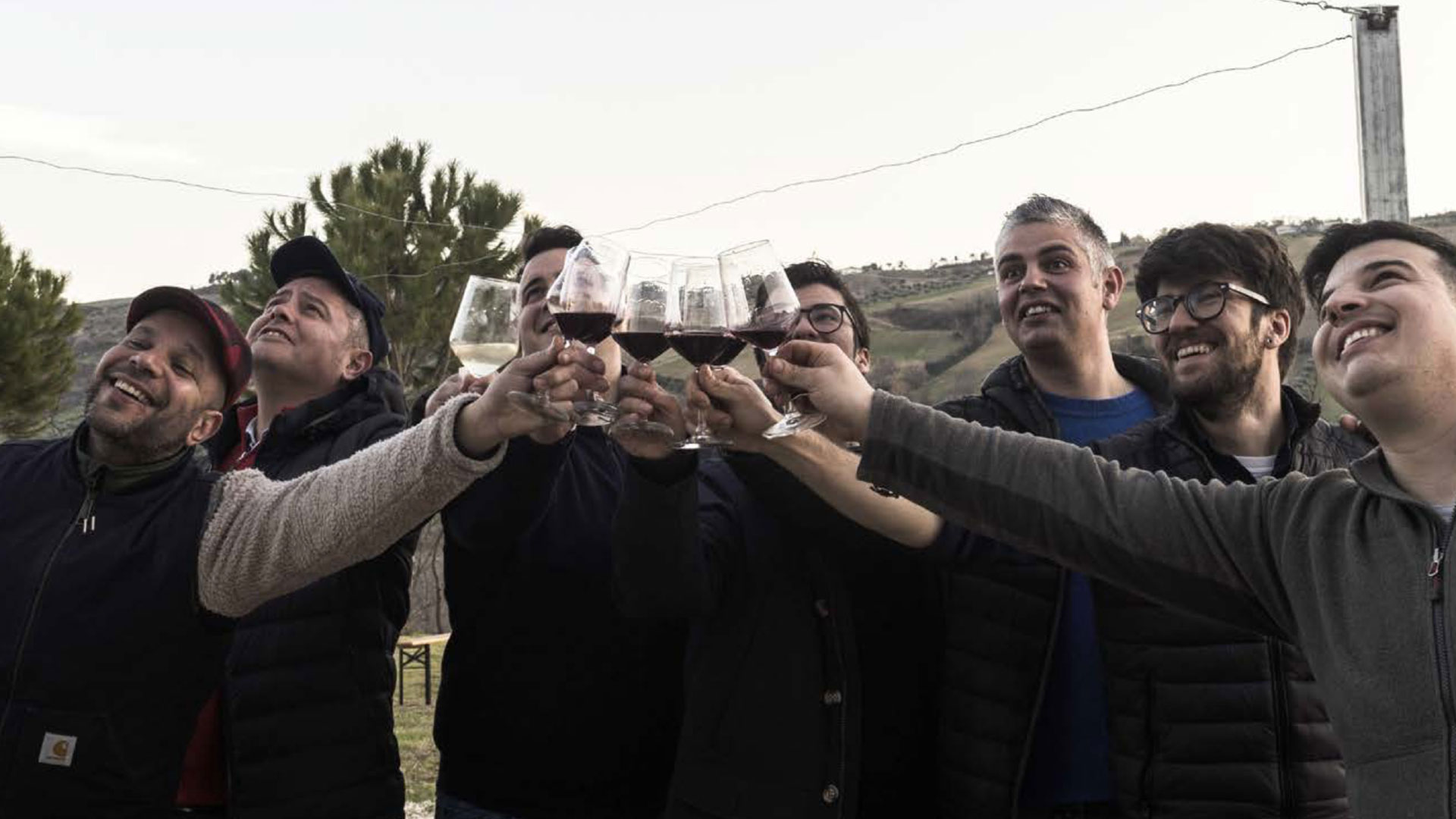 A Primordial Gathering on Collina Biologica

“The first thing I read about Emma Goldman was not a book. The quote was written on a wall with red paint. When I saw those words it was as if someone had torn them from inside my head: ‘Anarchy means liberation of the human mind from the dominion of religion, liberation of the human body from the coercion of property, liberation from the chains and restrictions of the government. It means a social order based on the free grouping of individuals’. The concept was pure, simple, true. It was an inspiration, lit a fire inside me.”

The crackling of the fire, which blazes from the brazier on the ground, serves as a preview for a rural feast in honor of Abruzzo. A country feast, wanted by that bad boy with an obsession for oenology and territory, Francesco Cirelli. The idea of the producer was to invite three families of restaurateurs to the “Collina Biologica” on his farm. To joyfully celebrate the concept of brotherhood with those of kindred souls and passions. Thus, while three of nature’s giants overlook the landscape (Majella, Gran Sasso and the Calanchi di Atri), as many pairs of chefs and maître of Abruzzo are preparing to cook, uncork bottles and do some healthy and well-considered revelry. Shoulder to shoulder, free to express themselves.

The project was not simple, because Abruzzese cooks are known to be introspective and profound of spirit. Rigid and unperturbed on the surface, like the mountains that mark the landscape of this region. But also warm and genuine beyond their rough exterior. One must pray for empathy that ignites spontaneously in the gut and comes from sharing a sacred product of these shores like wine. And it was precisely the nectar of Bacchus – in the most radical and rooted form of the terroir – that acted as a catalyst for this meeting of anarchist cuisine, in the most noble sense of the term.

Three groups of brothers, belonging to generations of local restauranteurs, have joined in an open air culinary jam. A party based on ancient character – with a mix of styles – to share fundamentals of Abruzzo’s gastronomic tradition. Through a bond of blood that has led to a shared attitude towards fire, knowledge, blades and phonies. All have lived in an exceptional playground which runs wild over about 20 hectares of land. Dotted with centuries-old olive trees, vineyards, indigenous farms and crops grown in full harmony with natural cycles. That “Collina Biologica” mentioned above, which gives life and breath to the symbolic vines of the territory and to agricultural products treated with love by Cirelli’s team. With an approach that overwhelms time and preordained space. Protecting artisan ways with a modern approach.

The same story, jostling from the past to the future, tells the story of the protagonists of this unusual Brotherhood Meeting: The Herculean children of Villa Maiella, Arcangelo and Pascal Tinari, are heirs of a heritage of hospitality and farming that has been at the forefront of Guardiagrele since 1968. A solid outpost, devoted to the cult of knowledge, which has evolved without denying its roots. Starting from the ancestors Arcangelo and Ginetta, passing through the Michelin star gained in 2009 by the indestructible and histrionic chef Peppino, and assisted by his wife Angela (parents of the two brothers, Arcangelo and Pascal). Up to the current situation, which sees young people returning home after having been away and gaining important experience. Archangel was forged in the kitchen by Michel Bras’ France; Pascal matured in the art of dining at institutions such as the Auberge de l’Ill and Dal Pescatore di Canneto sull’Oglio. Both have chosen to combine their talent with insights accumulated whilst they were away. At the same time, taking part in a re-evaluation of traditions while respecting and appreciating ancient knowledge that lays within them. It can be seen in their rearing of black donkeys, hens and pigs whose pictures add flair to the restaurant menu. And in the incessant search for identity on their winemaking.

The twins Mattia and Alessio Spadone, arrive with crackling energy from La Bandiera di Civitella Casanova. A bulwark of fine family-run agricultural dining, with its origins in a humble trattoria (formerly Sali e Tabacchi) founded by the pioneering Anna and Giovanni Spadone in 1977. Through the tried and tested wrist of Marcello in the kitchen and the botanical knowledge of his wife Bruna, the space has become a star- rated restaurant with a proud bucolic appeal. By integrating the experiences that the two sons have brought back with them from pilgrimages across the border. Mattia, with his marked sensitivity and culinary avant-garde approach gained from time at El Celler de Can Roca of Girona, and Alessio who exhibits the elegance and savoir faire of the service in the dining room learned while working at Enoteca Pinchiorri of Florence.

Last but not least, a burst of iodine and saltiness of the Adriatic coast arrives. Carried with both irony and professionalism by Nicola and Antonio Fossaceca of the Ristorante Al Metrò di San Salvo. A further star-studded lighthouse in the local scene, which has undergone a drastic and winning metamorphosis since its beginnings as a simple pastry shop started by their father Domenico, and mother Antonietta in 1979. The change was brought about thanks to the singular focus of the two brothers on growth, in ways both heartfelt and sincere. It was through the innovative seafood cuisine of Nicola, who gained his wisdom by the side of Mauro Uliassi and Niko Romito. And through Antonio’s management of the room and cellar, learned through deep exposure in the wine world.

They represent three pivotal posters of “Made in Abruzzo” catering. Three distinct entities, intertwined close to a brazier to create in exuberant freestyle, an edible ritual. They do not betray expectations: one can observe the restaurateurs do their utmost to make their own contribution – both fundamental and experiential – in a collaborative and instinctive manner. They turn the ingredients of the farm and vineyards into a culinary stage vibrating with excitement.
While the Tinari brothers load whole hogs of black pigs from their farm – ready to be sliced and seasoned to finish on the grill – Alessio and Mattia Spadone carve pecorino, caciocavallo and self- produced liver salami, to match the first battery of wine which has evaporated in a flash. Nicola Fossaceca improvises an eccentric interchange between his Adriatic shrimp and the pork belly brought from Villa Maiella: a futuristic and tasty surf & turf skewer, barely touched by the living flame, which exemplifies the authentic sharing of the moment.

The calm, jovial and orderly chaos makes its way to joy and laughter, teasing and snapshots of collectivity. Productive debates revive remote customs and archaic tools. Like the carved bloodied branches that Mattia Spadone uses for his mega-roast lamb marinated in fenugreek and fermented juniper. Or like the common joke aimed at fetishism for the “Abruzzo hunchback”: the main knife of the local tradition of knife cutters, which every cook decides to show off with an emphasis on behaving like children. There are those who find the courage to attempt to forage wild herbs (Nicola and Mattia). Or who behave with unfettered enthusiasm, opening bottles of sparkling Trebbiano with swords and distributing rivers of Montepulciano in amphora (Antonio and Pascal). The sunset is tinged with the purple shades of the incomparable pork ribs that Arcangelo apportions with a firm air on the big wooden table. A free for all, where one’s stomachs can be filled.

And in the background the last red rays of the sun bounce on the pirate label of the Wines of Anarchy rosé embedded in the ice. Even the wine itself seems to be possessed of a red light from within. It is a final image that summarises the theme of this precious gathering. In which a territorial brotherhood – lived beyond any institutional bond or dogma – has found a way to come together through free and anarchic love for food, wine and feasting.